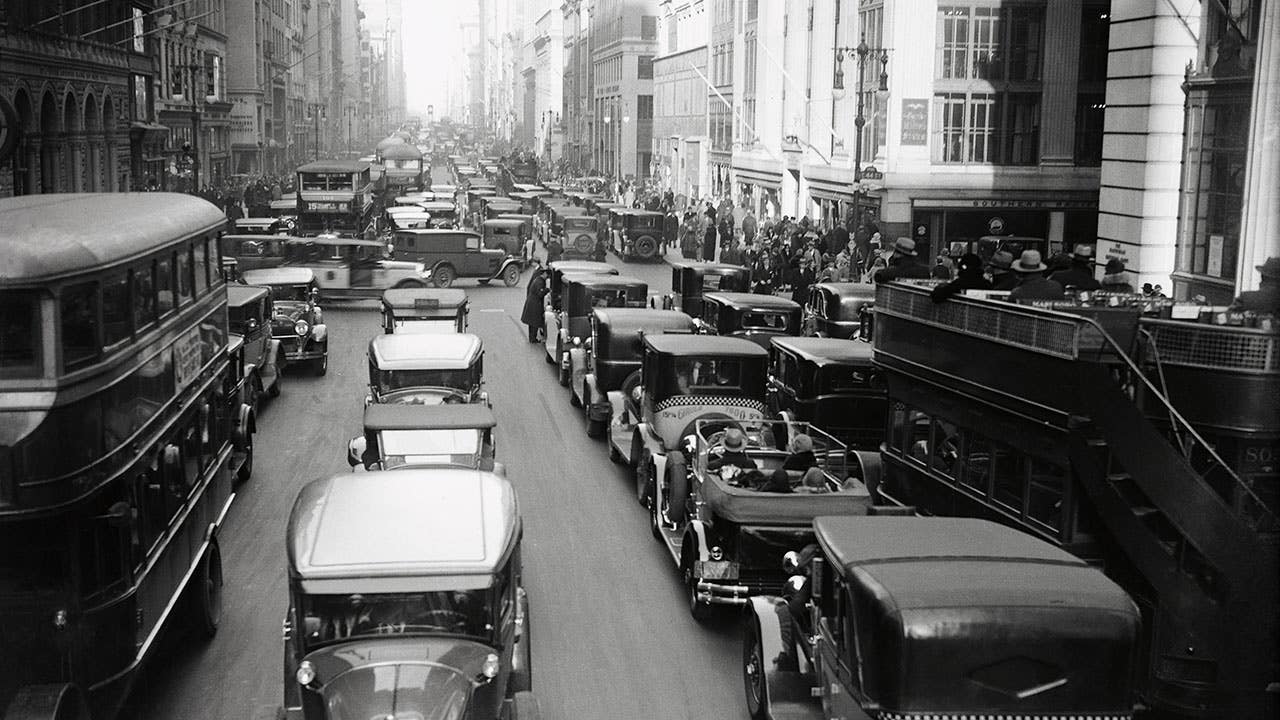 It’s been over 100 years since Prohibition, which outlawed buying, selling and transporting alcohol, was established, but you may not realize how much influence it still has today. In 1933, the 21st amendment was passed repealing the law, but its effects still linger. One of the most interesting effects is how drinking, driving and racing cars became intertwined.

Leading up to and during Prohibition, driving under the influence was very common. Fast forward to the 21st century and drinking and driving is still responsible for one-third of all traffic fatalities. But illegally transporting alcohol was even more prevalent since it was so lucrative. The illegal alcohol transportation industry created a need for “runners,” or drivers who could quickly get alcohol past law enforcement, which helped lead to the formation of the modern-day NASCAR. Bankrate took a look at some of these lasting effects of Prohibition and how they influenced our relationship with car racing, driving and drinking today.

Prohibition was established as the 18th amendment to the Constitution. The amendment made it illegal to manufacture, transport and sell alcohol. While it wasn’t strictly illegal to drink alcohol during Prohibition, lack of access to alcohol made it very difficult. But what was the breaking point and why did the U.S. decide that 1920 was the year to establish this amendment?

At that time in America, there was a strong appetite for temperance, or completely abstaining from alcohol. The temperance movement was growing in popularity as more women began to believe alcohol was destructive to families and wanted it removed. It wasn’t just a family issue, though. Factory workers were getting hurt on the job because of alcohol abuse, so there was pressure from the owners to do something to protect businesses. Religious objections were also increasing as alcohol was viewed as a tool of corruption.

Eventually, these forces grew strong enough to push the country into a new era. The “Noble Experiment” was officially established and Prohibition was signed into law on January 19, 1920.

Some may argue the ideals of Prohibition were intended to be good and reduce the impact alcohol was having on marriages, families and jobs. But its intention was quickly overshadowed as other major unintended consequences began to crop up.

Many had predicted an economic boom for businesses, such as real estate, soft drink companies and chewing gum manufacturers. Instead, Prohibition paved the way for unprecedented criminal activity and created ripe conditions for an economic downturn. The country saw a rampant rise in organized crime, which put more power into the hands of mob rulers like Al Capone. And states which relied heavily on the tax revenue from the distribution of alcohol were suddenly forced to make up the money somehow.

The manufacturing and distribution of alcohol may have been illegal, but it didn’t suppress America’s desire for it. Instead, Prohibition encouraged people to find creative ways to get alcohol and generate replacements for lost income while evading the law. States like North Carolina, Kentucky, Tennessee and West Virginia were hit the hardest and bootlegging became an increasingly common way to make up for lost money and get alcohol into the hands of a population that was still thirsty for it. Bootlegging was the common practice of illegally transporting and distributing alcohol, particularly homemade moonshine. And to do that, bootleggers needed fast, reliable cars.

Bootlegging may have been born during Prohibition, but it also led to the birth of something else — NASCAR. The National Association for Stock Car Auto Racing, or NASCAR for short, was founded, in part, due to the popularity of bootlegging. Bootleggers needed cars they could alter and use to transport liquor with speed and ease. This meant modifying cars so they could hold more booze, keep it safe during transport and outrun law enforcement.

But these modified cars didn’t have to be used 24/7 for running booze. When the cars weren’t being used for bootlegging, their owners began to use them for fun. The cars soon became staples in the community and generated quite a bit of interest from other people. Soon, informal stock races began to spring up as a way to pass the time, and local spectatorship grew. But it was not without controversy. As some began to realize these souped-up cars were being used for illegal activities, people began to protest the stock car race

Although there were protests and the races were becoming contentious, there was clearly a demand for watching them. At the same time, a new skill set was being born. While the runners were speeding around on country roads hauling moonshine, they needed to learn how to quickly fix flat tires and other small mechanical issues to evade detection and get their product to consumers. 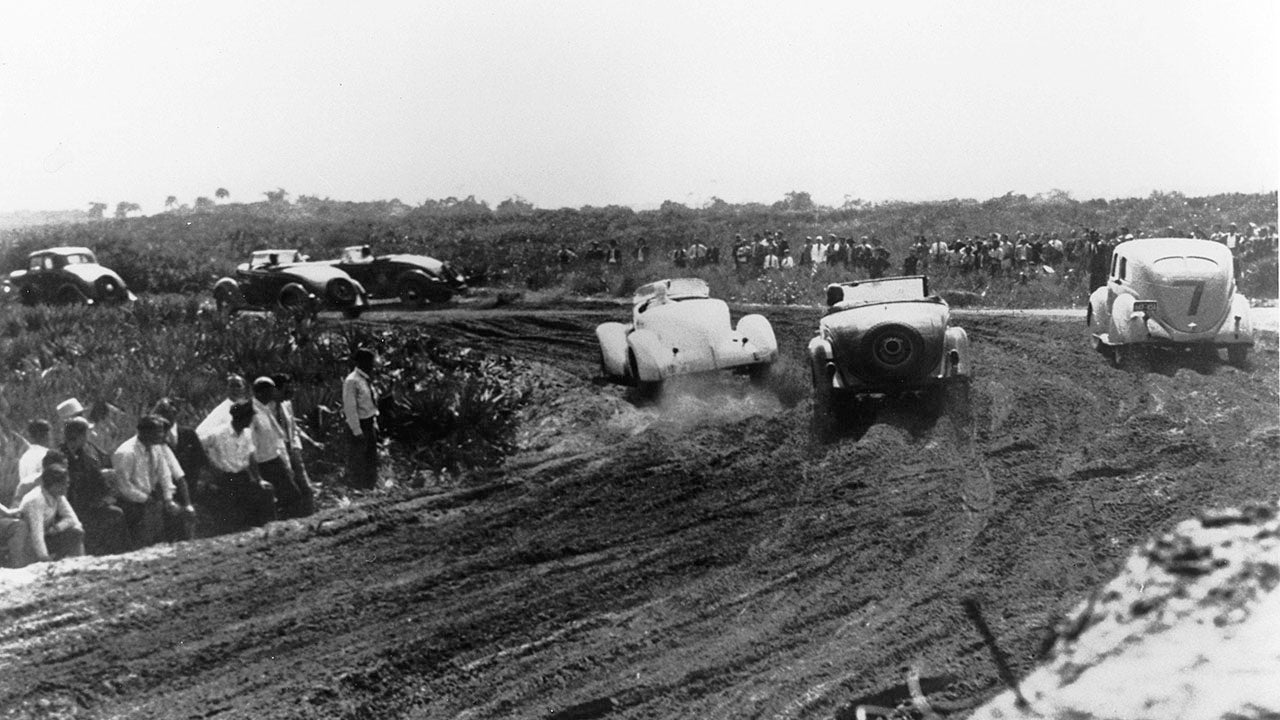 As the popularity of stock car racing grew, demand for the mechanic skill set of these runners grew, too. As casual racing became more and more common, it created the demand for something more official. The first officially promoted stock car race took place in Daytona Beach in 1936. The race itself lost money, but it turned out to be a pivotal moment in racing history. Bill France, the race’s fifth-place winner, recognized the potential of racing as an organized sport and immediately began working to formalize it.

For over 10 years after that first race, as France and others participated in numerous races, they recognized that race promoters needed to organize their efforts and protect drivers from unscrupulous promoters who would take off with their winnings. Though World War II paused his progress, France refocused his efforts after the war ended. He quit driving and shifted exclusively to race promotion. In 1948, after meeting with drivers, mechanics and car owners, he officially founded NASCAR and legitimate car racing was born.

To be successful, NASCAR had to distance itself from the bootlegging reputation of its roots and the illegal activities associated with stock racing. Instead, the new organization sought to gain corporate sponsorships and operate as a legitimate business. The newly-founded NASCAR focused on things like uniform rules, insurance coverage and guaranteed purses.

The first organized NASCAR race was held on February 15, 1948 and was won by Red Byron, a former moonshine runner.

In 1908, the world was introduced to Henry Ford’s Model T. The introduction of this car and its popularity eventually led to the development of the Ford V-8 engine, which made its debut in 1932. Although Henry Ford forbade his workers from drinking, his V-8 engine inadvertently became a bootlegger’s dream. It was fast, powerful and could withstand the rugged roads moonshine runners frequented to smuggle their loads. 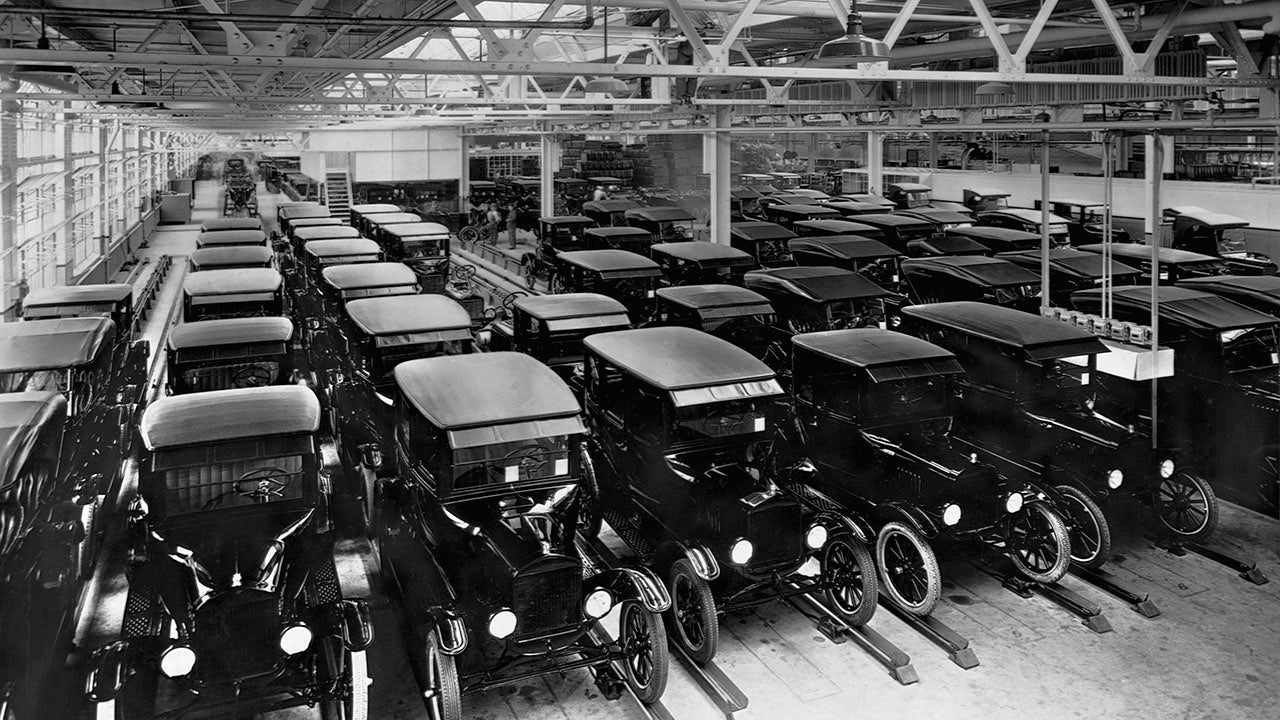 And bootlegging wasn’t all these new, powerful V-8 engines were good for. They also served to help catapult the popularity of the stock car races being held by bootleggers in their down time, which eventually led to the formation of NASCAR and birthed the legitimate race car industry.

NASCAR history is long and includes an equally long list of famous racecar drivers. The NASCAR Hall of Fame is lined with racing celebrities, many with direct ties to Prohibition. 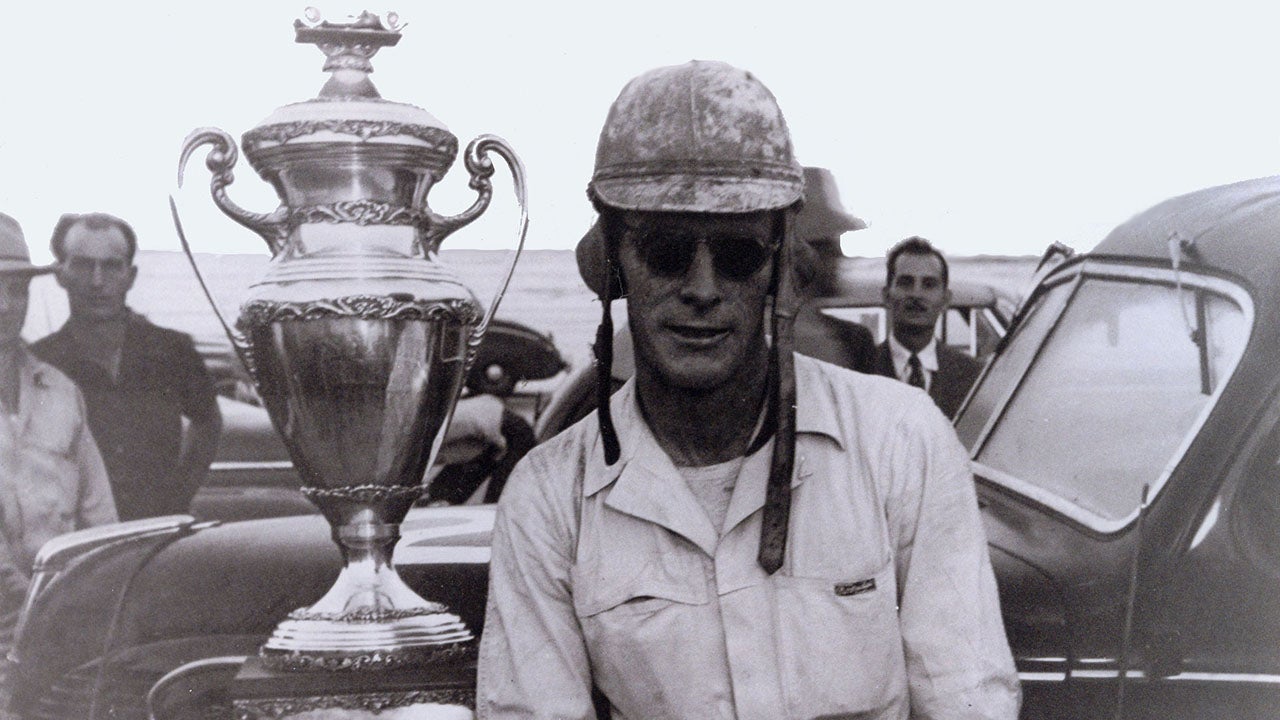 One of the most notable NASCAR figures is Red Byron, winner of the very first official NASCAR race conducted in 1948, as well as the inaugural NASCAR Strictly Stock driver’s championship (predecessor to today’s NASCAR Cup Series) the following year. Byron, whose racing career began when he was a moonshine runner, is widely regarded as one of the best drivers of that era.

“Rapid” Roy Hall is another notable racing figure. As a teenager in the 1930s, he ran moonshine by car on Georgia’s roads. He took a keen interest in stock car racing and by the end of the 1930s began participating in events. He went on to win several ‘unofficial races’ before the formation of NASCAR in 1948 and continued competing in official events through the 1950s.

Hall of Famer Junior Johnson also had an early “career” as a bootlegger running moonshine. He literally earned his learner’s permit by running corn mash hooch. Johnson went on to make his NASCAR debut in 1955 and cemented his legacy in the racing world.

After Prohibition was officially repealed via the 21st amendment in 1933, America quickly began its economic recovery — and its citizens had no trouble reverting to openly enjoying alcohol. While transporting and selling most forms of alcohol is no longer illegal, though, that doesn’t mean alcohol no longer poses any risks.

For one thing, there are still some laws in place that date back to the Prohibition-era. It is still illegal to manufacture and distribute moonshine without a license, including, in some states, an additional penalty if you conduct these activities while actually drinking moonshine. In most places, you are allowed to make your own alcohol for yourself, but be aware that there can be stiff penalties if you distribute it to other people.

And even though it is legal today to purchase and enjoy as much alcohol as you like, it still remains illegal — and extremely dangerous — to operate a vehicle (including stock cars) under the influence of alcohol.

The first drunk-driving laws in the U.S. were enacted in New York in 1910. After Prohibition was repealed, drunk driving laws remained on the books, but did not gain much real traction until the 1970s and 80s. Today, drunk driving is taken very seriously and there are lots of potential legal, physical and financial consequences. Like many freedoms, the right to buy and drink alcohol comes with added responsibility.

Responsible drinking includes understanding safe driving and how much it is legal to drink before getting behind the wheel. All states have a Blood Alcohol Content (BAC) threshold before you’re considered to be driving drunk; in many states, this level is .08 BAC. On average, reaching .08 BAC takes about four to five drinks, although there are many other factors that could influence your actual BAC after drinking, including your weight. And regardless of your BAC and the legal consequences, you should be aware that drinking alcohol and getting behind the wheel puts you and those around you in physical danger.

Getting charged with a DUI also wreaks havoc on your finances, including legal fees and costs associated with license suspension. Once you have a DUI or DWI on your record, your auto insurance rates are also likely to increase a lot, and some car insurance companies may not even be willing to insure you.

So while we may all breathe a sigh of relief that saying ‘cheers’ to our friends over a cocktail is not against the law, you may want to remember the consequences of drinking irresponsibly.

Although the fear of being arrested for manufacturing or distributing alcohol is a distant memory, the Prohibition era’s effects can still be felt 100 years later. When America temporarily turned its back on its beloved alcohol industry all those years ago, the official sport of car racing and the demand for the auto industry to produce more powerful engines was born. The next time you enjoy a beer while watching NASCAR, you may want to raise your glass to that — responsibly, of course.