Animals make great companions, offering unconditional love, companionship, and lips that will remain sealed when it comes to your secrets. They still are, however, animals, and when people forget that fact, the results are sometimes horrific. Here are a few of the stranger mishaps.

1. "Ugly Christmas Sweater" Was An Understatement

3. Not a Hungry, Hungry Hippo

Who Let the Dogs Out 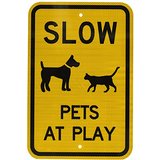 Of course, just because an animal has been domesticated doesn't mean that everything is going to stay peachy. From rabies to maulings, there have been a staggering number of dog-related injuries and deaths all over the country ( Wikipedia has a breakdown of the incidents).

If there is anything in particular that the dog attack cases demonstrate, it is that no matter how "tame" an animal, you never know what is going to "trigger" its animal instincts, so it is always good to be diligent.

Other lessons to take away from animal attack stories:

Many people put up "Beware of Dog" and other signs to alert passersby that there is an animal around that can attack and cause injury or death. These, of course, may help prepare neighbors and visitors before they visit the home, but ultimately, it is common sense that may be the biggest factor in the number and severity of pet attacks.

For your "Beware of Dog," "Beware of Attack Cat" or other pet warning signs, check out our catalog. You can also contact us online.