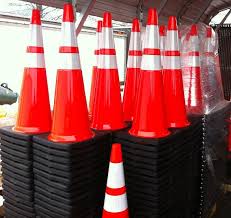 Uncomplicated and low-tech, the familiar  orange traffic cone hasn’t changed much in almost a century since its invention. Its easy, stackable storage ability, general ruggedness and instant recognizably has made it a go-to tool for traffic management, guidance and safety. It’s estimated that millions of orange traffic cones are sold each year in the United States.

Traffic cones perform so many crucial tasks. They alert motorists to upcoming road obstacles, hazards and work zones, help us to navigate traffic diversions where needed, give advanced notice of traffic pattern and lane changes, act as temporary lane separators, advise us of quick shoulder drop-offs, help to regulate merges and detours and provide protection to those who work to build and maintain our highways and roads.

Traffic cones are generally found on-board of trucks and safety vehicles because they’re the quickest and simplest way to mark a temporary need to divert or redirect traffic. Combined with flares, they’re an ideal, highly visible, short term solution. They help protect those who stop to help us on roads. They warn us to slow down and proceed with caution. They capture our attention. At times, they’ve also been known to capture our imaginations. Over the years, people have discovered many useful (and a few less-than-useful) traffic cone applications.

Some Of The Many Other Uses For Traffic Cones

Traffic cones are used extensively in sports, from little leagues to big. People have found them to be effective as megaphones, t-ball stands and apparatuses for marking out fields and skills courses.

They’re also used quite often to transform empty lots into functional parking lots. We’ve seen them modeled into popular works of art, run relay races around them, formed lines behind them – and at times – we’ve worn them on our heads (for some reason, this just never gets old). When we see one in a public restroom or fast food establishment, we assume that the floor is slippery underneath.

A bit more traffic cone trivia: approximately one million cones per year are pilfered by pranksters and, apparently, people who don’t know where to buy them.

Known the world over for its mind-boggling traffic jams, Los Angeles is, perhaps ironically, the birthplace of the modern traffic cone. Its patent belongs to Charles D. Scanlon, who conceived the idea while performing his job as a street line painter for the city of LA. Very simply, he was tired of seeing his lines get smeared by cars and passers-by before they had a chance to dry. He used old tire skins provided by Rodney B. Taylor, local tire shop proprietor turned business partner, sewing them together into cone shapes for stability, and painting them orange. A patent was awarded to him in 1943. Due in large part to the war effort, tire rubber became scarce and production was quickly halted.

In 1947, after the war, production resumed with the addition of a third partner, Charles Terry of Interstate Rubber Products Corporation. Word spread fast and traffic cones caught on from coast to coast. They instantly became a favored implement for road guidance and safety. It took just a few years before their importance was so highly recognized that safety cone regulations were added to MUTDC, the Manual for Uniform Traffic Control Devices (in 1961).

Though traffic cones come in many colors today, where safety applications are concerned orange is still the standard due to its high visibility and recognizability. Most traffic cones are also reflective and/or adorned with reflective white bands to further promote safety.

The symbol of a traffic cone transcends cultures and languages. All around the world, they’re relied upon to inform us, help keep us safer, and – occasionally – to amuse us. Yet even with their slew of non-traditional applications, they remain one of the most trusted, identifiable and understandable traffic signals on earth.

Dornbos Sign and Safety offers a range of MUTCD-compliant traffic cones. For cones to meet your specific needs, please feel free to contact us. We look forward to assisting you.